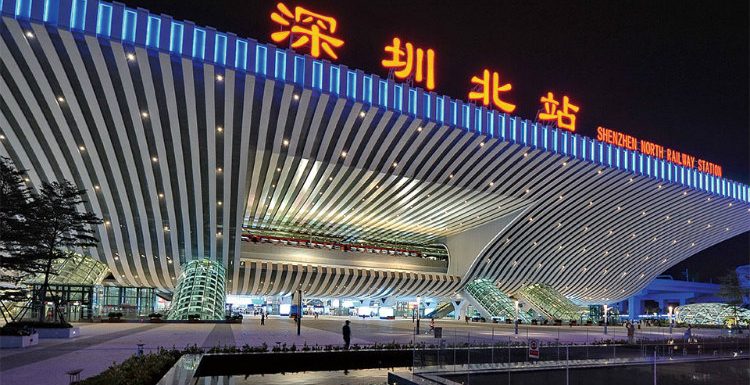 Prices vary, use as a guide only. Times vary slightly due to different train types used and the number of stops.

The easiest way is via metro. The railway station is interconnected to the metro station of the same name, Shenzhen North Metro Station (深圳北站) which is on line 4 and line 5. Due to the road networks buses to here say from Nanshan, or from Luohu can take well over an hour. In most cases, it’s easier to take the metro and transfer to line 4 and then go to the station. More about the metro and map.

The bus station is located in the East Square, and as of June 2018, there were more than 20 bus lines, including two inter-city bus lines, covering the areas that the metro could not reach.

You buy your train ticket before entering the waiting hall or passing through the checkpoint. There is an A1 ticket office and A2 ticket situated to the left and right of the main waiting hall entry on ground level. There are self-service machines but they only work if you have Chinese ID. Especially around holiday dates, the line to purchase tickets can be quite long. I have struck it many times when tickets have been sold out and I have had to stay overnight to board a train the next day. Always plan ahead. Also note, you cannot buy tickets or enter the waiting hall without showing your passport.

The station has a shopping mall attached (Bingo Space) which features a number of fashion outlets, stores, cafes, and eateries. You can easily kill a little time under the A/C there. There’s a Vans Outlet, Adidas store, and lots of local names.

Inside the station, once you have purchased a ticket and passed through the security checkpoint there are a number of fast food restaurants and cafes, and also a couple of convenience stores. Prices are a little higher inside but not outrageous but almost so. I suggest eating before you come or eat at the attached shopping mall before passing through the ticket check.

If you have a first class ticket there are sectioned areas in the center of the waiting hall which have comfy lounges and power sockets for charging. There is plenty of free seating in the central waiting area too.

There are a few power sockets outside of first class lounge areas, but not many, and you’ll be lucky to find a free one. There are a couple of coffee shops where you can make a purchase and use their wifi and power sockets IF they have any seats left. Restaurants include Kungfu, McDonald’s, KFC and a few others.

You can take the metro line 4 one station northwards to Longhua Station, there is a large mall there, 9 Square (九方购物中心) and several blocks of upmarket residential areas.