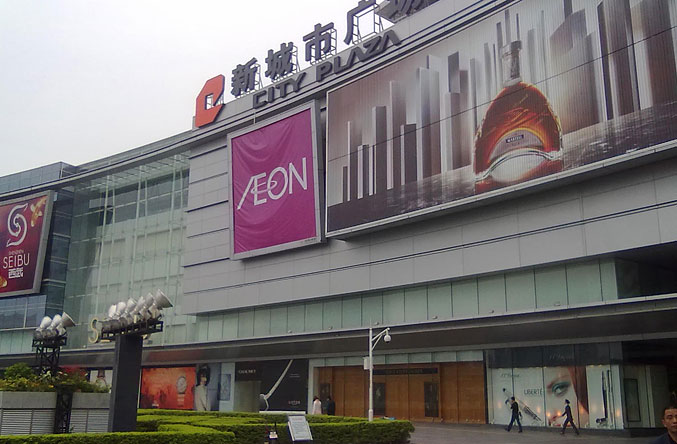 If you have been to Holiday Plaza, MixC, KK Mall and Coco Park you be starting to think that Shenzhenians have a real penchant for luxury brands. You may well be right, particularly when you add Citic City Plaza to that list.

Inside the same building, there is also a Seibu Department store, a famous Japanese department store which is also popular in Hong Kong, featuring international brands in fashion, cosmetics and the like.

There is also a Jusco Department store featuring groceries, staples and general merchandise and a large section for kids toys.

If you’re hungry there’s plenty to eat including McDonald’s, Cafe De Coral, Brazilian BBQ Haagen Dazs and many other casual dining options. For fine dining, there’s plenty of options on the upper levels.

At the front of the mall along Shennan Road, you’ll find a large public square with several bars.

Beneath Citic City Plaza is another mall, the City Metro Arcade, which links into the MTR Science Museum Station of Line 1. The Metro Arcade features 300 shops, although, there’s a lot of stores on the opposite side of the road that remains vacant. The open stores include many discount fashion shops and fashion accessories. Stores include Valentino, CK, and many Chinese brands along with many independent retailers. There are also several eateries.

What you can get there: Fashion, fashion accessories, dining, groceries

How to get there: take line 1 of the metro to Science Museum Station